Week 10 in the Capitol

LFT and LAE leadership partnered to host a small delegation of local leaders at the Capitol. Our member leaders had the opportunity to be a part of committee meetings and speak directly to their legislators about the proposed pay increase and the struggles educators are facing in the classroom. Members discussed the importance of the proposed pay increase for teachers and school employees. They urged Senators to follow recommendations from the Governor and BESE to use newly recognized revenue to increase the raise, in order to better match what neighboring states have passed. Overall, it was an opportunity for legislators to hear directly from classroom teachers about how legislation has impacted the teaching and learning experience in our schools. Click here to see more. 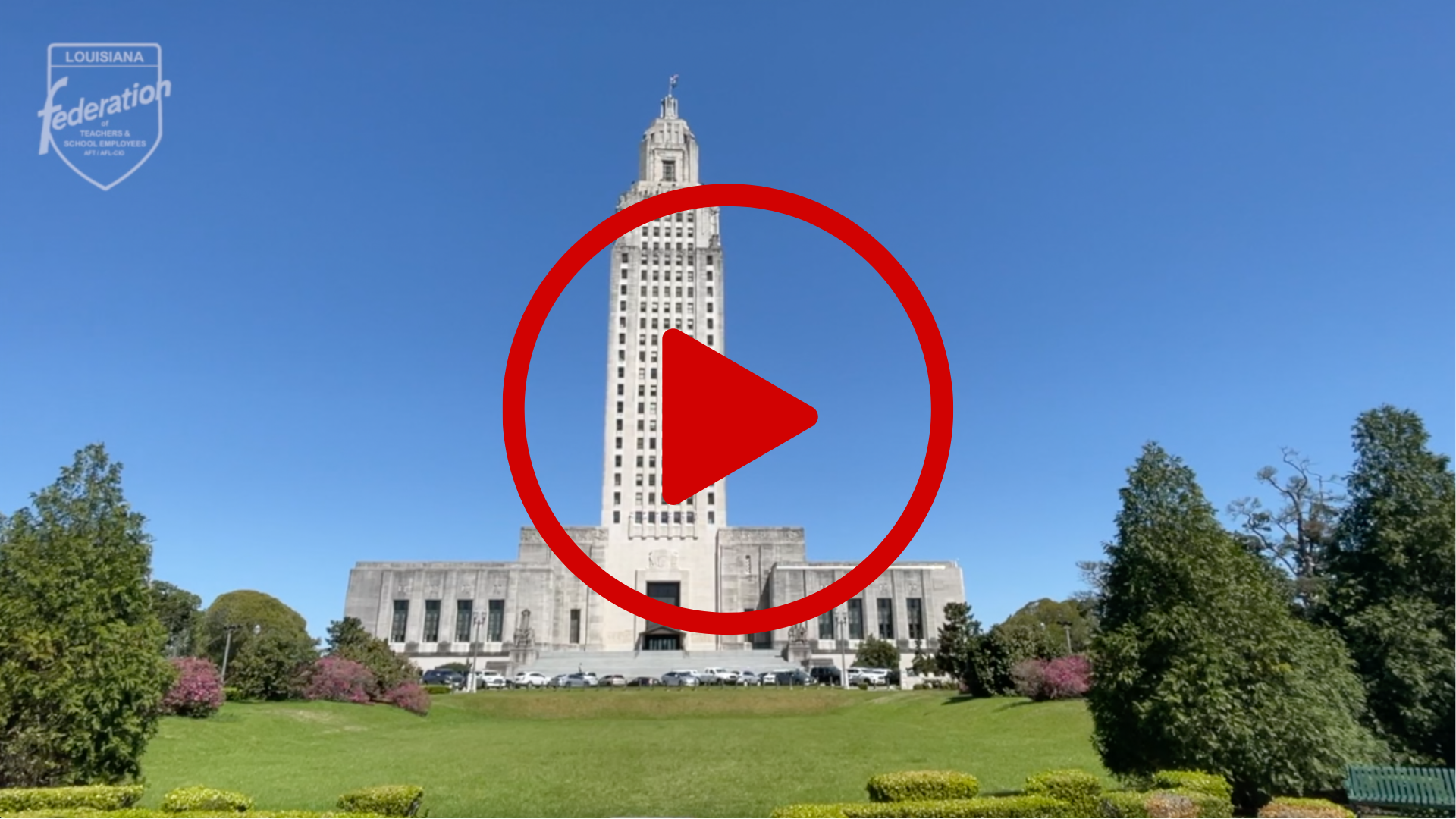 Unfortunately, despite outcry from LFT leaders and thousands of members across the state, the Senate did not increase the proposed raise. On Wednesday the Senate passed the budget bill and on Thursday, the House concurred to all amendments. The final legislative budget, which will now be sent to the Governor, includes a $1,500 raise for certified staff and $750 for classified employees. While this is the largest raise that Louisiana has passed in over a decade, it pales in comparison to what other states have done in recent years.

In 2019, when teachers got a $1000 pay raise and support staff got $500, almost every other state in the southern region gave their teachers more: Georgia gave teachers a $3,000 raise; Texas gave between $5,500 and $9,000. In fact, when you look at all the states in the southern region, $1,000 was the lowest raise given that year. Last year, states passed even further increases, including Arkansas which passed a $2,000 raise and increased funding for lower-paying school districts.

This year, we've already seen neighboring states giving a larger pay raise. Mississippi gave teachers a big raise, averaging $5,140. Alabama gave most teachers a 4% raise but those with a bachelor’s degree and 35 years of experience would get a 20.8% raise. Georgia gave $5,000 over the past two years with regular increases moving forward.

Our schools are in a critical moment and extreme staffing shortages are impacting students and teachers alike. This year, the legislature had hundreds of millions of dollars available that they chose to invest in pet projects instead of doing more to help our schools when we need it most.

This level of disrespect from our elected officials is nothing new. As we look towards the future, we know that we will have to stand up and fight for what teachers and students deserve. What are you willing to do? Click here to let us know.

Attacks on Educators Fail in Committee

A series of bills by Rep. Garofalo that sought to limit free speech for teachers and school employees as well as force districts to post extensive instructional materials online failed in the House Education Committee on Tuesday. House Bills 747, 787, and 1014 were some of the most extreme bills proposed this year that put educators and students in the middle of a culture war that has no place in our schools. These bills would have created significant extra work for our already overworked staff and limited teachers’ ability to be responsive and dynamic in their classroom. As we have said before, collaboration between parents and teachers is critical for student success. Legislators should be thinking of ways to foster this important communication, not attempt to pit us against each other. Thankfully, the majority of legislators saw this political stunt for what it was and rejected these offensive bills. Rep. Garofalo represents the St. Bernard and Plaquemines area.

HB 156 (Freiberg) is a bill crafted by the Louisiana Department of Education. After a 2019 FBI audit that revealed the LDOE has been out of compliance for the last 30 years, the department created this legislation to allow them to process checks for all current teachers and, moving forward, all teachers at the time of certification or recertification. The troubling piece about this legislation is that it would require teachers to shoulder the financial burden of these duplicate background checks. Teachers would have to pay a fee of $190, and that fee could increase in subsequent years.

Cynthia Posey, LFT Legislative & Political Director, testified before the Senate Education Committee on Thursday. She pointed out the many ways that the LDOE has been unforthcoming about the details behind their plan and the fact that there are other options that haven’t been pursued. You can watch Ms. Posey’s testimony here.

On Tuesday afternoon, just as our leaders were leaving the Capitol​, the House decided to move HB 663 (Frieman). They scheduled it to come before the House Committee on Industry and Labor on Thursday. This bill is aimed at eliminating the collective power of teachers and school employees by diminishing their unions’ ability to collect dues, which is the primary funding source for all labor organizations.

Under this bill, your membership in LFT or any other union would automatically expire every year. You would be required to resign-up every year AND email the school board each year to let them know that you want to extend your membership. Failure to do so would result in suspension of all member benefits, liability insurance, and representational services. Ultimately, this bill threatens to undermine the financial solvency of LFT and all organizations that represent teachers and school employees, thus eliminating our voice at the capitol.

Thankfully, this bill was delayed. The committee meeting adjourned before they were able to take a vote on HB 663.

On Thursday, May 19th, the Senate Education Committee approved HB 363 (Bryant). This bill would make it so a supervisor (usually the school principal or assistant principal) would have to sit down with each teacher and discuss their SLTs. If they don't have this meeting, then SLTs can't be used in that teacher's evaluation.

Unfortunately, the language that mandated that teachers and administrators develop the SLTs "collaboratively" was removed by the House Education Committee last month because representatives from the Louisiana Association of Business and Industry (LABI) and the Pelican Institute objected to that requirement. In some districts there isn't even a conversation about SLTs, so this is a step in the right direction. No longer could districts or principals just hand down SLTs without considering the needs of individual students or the input of teachers. Even with these amendments, this bill has a long road to go before it can become law. Next, it will proceed to the Senate floor for final approval.

HB 819 (Cox) is due to come before the full House on Monday, May 23rd. Rep. Cox has been out with an injury, but Rep. Jefferson stepped up to carry the bill through the process. HB 819 would expand extended sick leave provisions to all school system employees. Specifically, it would:

HB 819 is currently scheduled for debate before the full House on Tuesday, May 17th. Click here to ask your legislators to support HB 819!